GraphPlot can be used to plot multiple graphs of engineering, scientific or business data. Curve fitting and interpolation may be performed. There would be one independent variable X and a maximum of 5 dependant variables Y, Z, R, S and T. In addition to plotting the various graphs, the program will also create a polynomial curve fit routine (maximum degree of 5 that is user selectable) for each of the dependent variables, as follows: Y = a0 + a1*X + a2*X2 + a3*X3 + a4*X4 + a5*X5

Where a0, a1, etc are constants to be determined from the curve fitting routine.?M 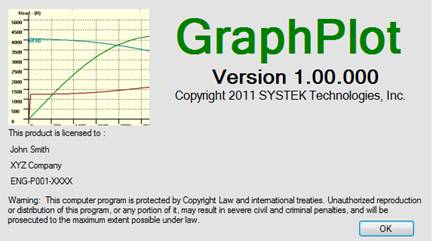 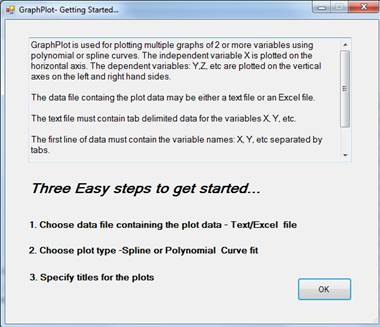 The datafile containing the data to be plotted may be a txt file or an Excel file. The user can change the Main titles of the graph and that of the individual plots. 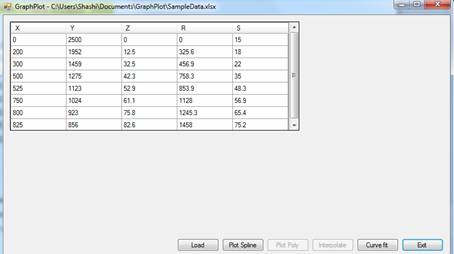 he format of the datafile is a tab-delimited text (or an Excel file) file containing the X, Y, Z, R, S and T values of floating point data as indicated in the example file below. (This file contains one independent variable X and 4 dependant variables Y, Z, R and S)

Once the data file is loaded it is displayed with the data in a spreadsheet. A Plot button will initiate graphic plots of X versus the other variables. The Curve fit button is for creating a polynomial curve fit of each dependent variable (Y, Z, etc) as a function of the independent variable (X) based on the user specified degree of the polynomial (maximum = 5). The coefficients of the curve fit (such as a0, a1, etc) are displayed below the data grid for each of the dependent variable Y, Z, etc. The Interpolate button will prompt user to specify the X value and the calculated values of Y, Z, and etc T will be displayed in the data grid in a different color from that of the main data. When plotting is initiated, the independent variable X will be plotted on the horizontal axis. The dependant variables Y, Z, etc are plotted on the vertical axes. The left vertical axis will be Y values. The remaining variables (Z, R, S and T) will be plotted on vertical axes located on the extreme right side. The scales of the various axes (minimum, maximum and increments) are displayed for user to change if desired. Similarly the Titles and sub-titles for each plot will also be specified by the user. The graphs are plotted in a separate screen. The graph screen can be copied (to clipboard), saved or printed using the Copy, Save and Print buttons.

Typical plots of one independent variable X (Flow rate) versus three dependant variables (Head, Efficiency and NPSH) are shown in the screen shot below. 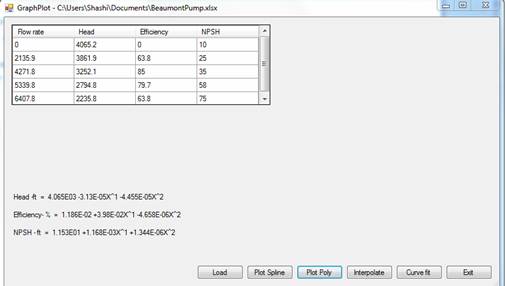 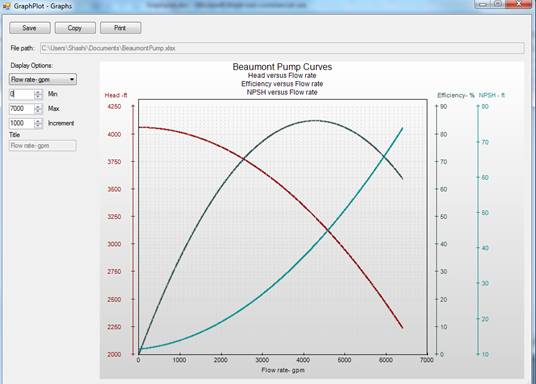